For Young Kids Orthodontics Isn’t Just About A Pretty Smile

Every parent wants their child to be able to smile with confidence but for many that’s not the only reason to investigate orthodontics at an early age. While the average age for orthodontic treatment is around 12 years old, we at Michael Sokoloff Orthodontics have a mission to focus on children 7 and up to follow up with the American Association of Orthodontics guidelines. Why, you ask?

Early Orthodontic treatment has many benefits. An orthodontic consult at an early age can catch future issues and adjust for them before they become problems. Some of these issues include:

The benefits to Early Orthodontic treatment are clear:

Not every child will need early treatment, but if they need early treatment and if it is caught early on by a trained orthodontist, it could make a big difference in the outcomes of treatment later on by taking advantage of growth and also by possibly avoiding extractions.  Knowing the importance of early orthodontics is only part of the battle. Then the question is who do you talk to? We at Michael Sokoloff Orthodontics focus on your child’s individual needs and focus on early orthodontic treatment to avoid extractions and also to take advantage of growth!

Click below to schedule a consultation appointment at our practice conveniently located in White Plains, NY or call us at (914) 9490068. 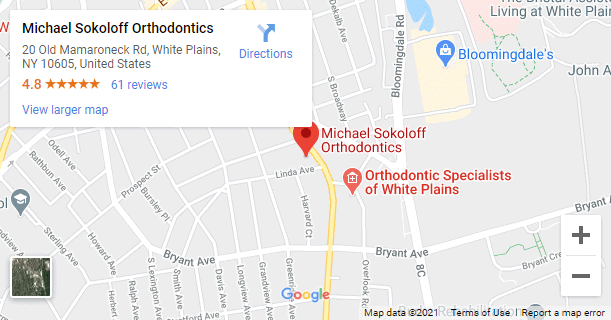